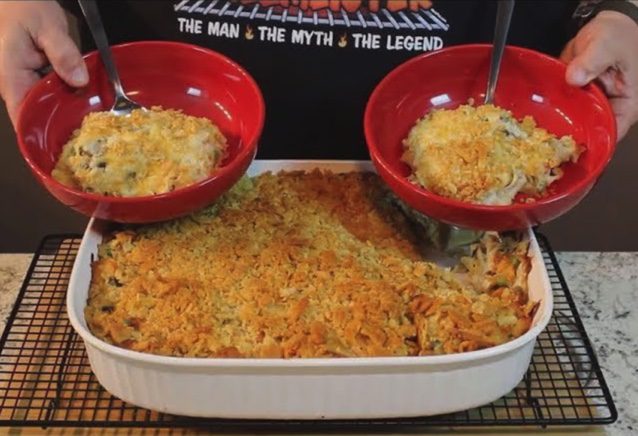 Enjoy this delicious easy creamy fish casserole recipe anytime! If you love to fish or just like eating fish, you will love this fish casserole. It’s very easy and filled with white flaky fish, mushrooms, cheese, and more! You can use Crappie, Bluegill, Tilapia, or any white fish you enjoy!

(Crappie or Tilapia Fillets, or your choice)

¼  Cup Half and Half

Salt and Pepper to taste

Baste both sides of each white fish fillet lightly with some olive oil and season with salt and pepper.  Then bake them in the oven on a baking sheet uncovered at 350 degrees for about 25 minutes, or until they flake apart with a fork.  Remove from the oven and place the fish fillets in a bowl.  Flake each fillet apart using a fork, then set aside.

Bring a large pot filled ¾ full of water to a boil on medium heat.  Add egg noodles and 2 tsp. of salt and boil (stirring occasionally) until almost done, or al dente (about 2 to 3 minutes less than package suggested cooking time).  Then drain and set aside.

In a skillet on medium heat, add 1 tbsp. olive oil and 2 tbsp. butter.  Once the butter has melted, add mushrooms and saute until tender.  Season with salt and pepper, then remove from heat and set aside.

In a large bowl, add the flaked fish fillets, onions, peas, mushrooms, and 1 cup of the shredded cheese.  Stir in the cream of mushroom soup and half and half.  Then fold the egg noodles in a little at a time until coated with the mixture.

Pour mixture into a 9 x 13 casserole dish sprayed with nonstick cooking spray and sprinkle with the remaining 2 cups of shredded cheese.  In a small bowl, mix together the crushed Ritz crackers and 1 stick of melted butter and spread evenly on top of the casserole.

Cover with aluminum foil and bake in the oven at 350 degrees for 30 minutes, then remove the foil and continue baking for 20 to 30 minutes, or until bubbly and the Ritz cracker topping is golden brown.

“This casserole is absolutely delicious…..you’re going to love it!”

If you love potato hash, you will love this breakfast recipe